Qua is a three-dimensional (3D) abstract strategy game for three players. It is an extension of the two-dimensional, two player game called Gale, marketed as Bridg-It. Qua is played on a 3D game board grid composed of NxNxN cells in the shape of a cube, where N is equal to the number of cells along each edge of the game board.

The objective of Qua is to be the first player to complete a connected path of cells containing their game play pieces between their two opposite faces of the game board cube.

The 3D game board does not start out empty. Some of the cells in the game board are permanently filled-in with game play pieces, called qua. The three qua game play pieces--one for each player--are distinguished from each other by shape and color. This makes it possible for blind people to play the physical versions of Qua games.

The 3x3x3 Qua game frequently ends in a Kingmaker scenario. Interestingly, the 2nd player tends to win the most games.

The 4x4x4 Qua game has multiple empty cells adjacent to each other, which requires strategic thinking to use effectively. Players need to look several moves ahead to stop another player from making unbeatable moves that occupy empty cells that no other player can occupy.

The 5x5x5 version was highlighted in the 19th issue of the online New Abstract Games magazine:  https://www.abstractgames.org/qua.html.

A Qua game can be played cooperatively, where the game objective is for all three players to complete their connections and become winners.

I want to thank the Jefferson County Public Library in Washington for helping me prototype the physical 3D versions of Qua game boards and game play pieces using their free public 3D printer.

If you download copies of the Qua Game Playsheets, please make a $1 donation. Thanks! 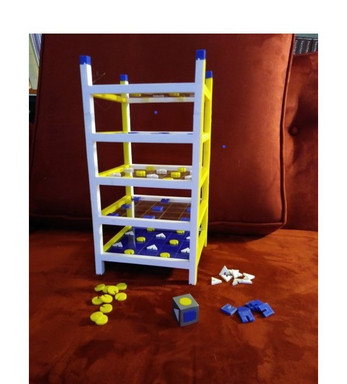